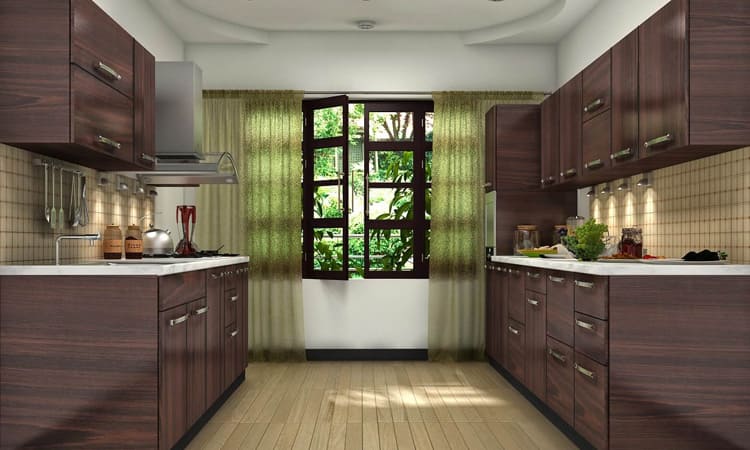 Moving homes or renovating the house is not easy. When it comes to kitchen interior design, it is easy to get perplexed and overwhelmed. You want all the kitchen appliances –  whether small ones like the mixer and blender or the large ones like the refrigerator – in place, and you want both aesthetics and high levels of functionality. Kitchen is arguably the most used space in your home, so it’s normal to want to get it just right. So before you delve into the hard task of designing or renovating your kitchen, let us explore some kitchen layouts that you can choose from, depending on the size and shape of the rest of the kitchen.

Like the name suggests, the L-shaped kitchen is a modular kitchen design in which two counters are placed at 90 degree angles to each other – in a literal ‘L’ shape. This layout works like a charm for smaller kitchen spaces, as it gives the mobility and efficiency to cook and clean. It can also be tweaked according to the size of your kitchen; the two counters can be elongated or cut short based on the kitchen measurements. You can also add a small dining table with this layout to create a cute little eat-in station in your kitchen.

Unlike the L-shaped layout where there are two counters perpendicular to each other, the U-shaped kitchen design forms a ‘U’ by having the counter run along three sides of the kitchen. It blends well with both larger and smaller kitchens, and is versatile and efficient in its function. It offers a whole lot of counter space so multiple people can work together in the kitchen at the same time. It also meets lots of storage requirements in the form of wall-mounted cupboards and kitchen cabinets, and also makes sure all the kitchen appliances are within convenient reach.

Parallel kitchen, also known as the galley style kitchen encompasses two counters that are placed on opposite ends. This layout is perfect if you have a kitchen space that’s narrower and longer than broad and large. It gives more space if you have two people working in the kitchen at the same time, and you can also keep more kitchen appliances without it looking like a cluttered mess. This layout also provides easy mobility as the counters are at least three feet apart. It is an efficient design that also takes care of the sink and refrigerator without them coming in the way.

If you need extra counter space then this kitchen design will be perfect for you. It is multifunctional- it acts as your breakfast table, as well as accommodate a sink or a hob. It is a popular kitchen design layout in western countries and is slowly becoming known in India as well. The island kitchen design can go well with both a u-shaped or l-shaped kitchen, it just depends on the amount of space you have in your home.

If you are thinking of a U-shaped layout but think you need more space than that, you can always go for the G-shaped kitchen interior design. It is identical to the U-shaped design, with the exception of an extra counter or peninsula which is attached to one arm of the ‘U’. It is a brilliant utilization of available space and offers even more efficiency.

So here are all the popular kitchen layout designs. Explore all of them and choose the one that works best for you, on the basis of your preference and kitchen space.

How to shop for prostate supplements

5 Foods That Increase Fertility in Females

Hammock Swings: Health Benefits you Can Enjoy with Your Swing

Learn the most beneficial treatment methods of removing dandruff

The issue of Scars and various ways to deal with it